According to a study published in the January 1999 issue of the Journal of Periodontology, approximately 23 percent of women ages 30 to 54 suffer from periodontitis (gum disease), the advanced stage of gum disease. In addition, a survey by the California Dental Association revealed that 48 percent of female dentists questioned felt that periodontal disease was the biggest oral health concern for their female patients. 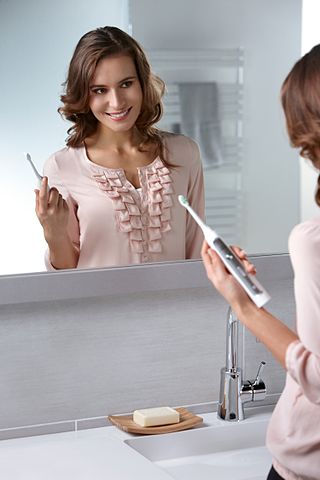 Gum disease is a problem for both men and women. But for women, gum disease poses a more serious threat because of the many physical changes experienced during their lifetimes, such as puberty, menstruation, pregnancy, and menopause. Oral contraceptives can also contribute to gum disease, as can anti-depressants, diuretics, diet pills, and anti-allergy medications, all of which can decrease the amount of saliva in the mouth, creating an optimal environment for disease to grow. Eating disorders, such as bulimia and anorexia, can also harm the teeth.

Click on the topics below for details on how they influence women’s oral health:

During puberty, young women may experience gum disease as a result of increased levels of progesterone and estrogen. These hormones cause more blood to circulate to the gums, according to the American Academy of Periodontology. This increase in hormones, in combination with plaque and food particles, can contribute to red, swollen, and tender gums. However, symptoms usually diminish as puberty passes. Your dentist may recommend periodontal treatment to prevent damage to the tissues and bone surrounding the teeth. Be sure to visit your dentist regularly in order to keep potential gum disease from progressing and follow a good oral hygiene routine that includes daily brushing and flossing at home.

Some women may experience several changes in their mouths – such as swollen gums and salivary glands, lesions, and canker and cold sores – during menstruation, according to the American Dental Association. For some women, there may not be any noticeable changes, but for others who already have a history of gingivitis, the gums may bleed a few days prior to menstruation as a result of increased levels of progesterone and estrogen. Symptoms often dissipate after the menstrual period begins. However, it’s very important to visit a dentist as soon as possible. Your dentist can prescribe special cleanings, gum treatment, or topical anesthetics to help ease discomfort.

Women often experience many physical changes in their bodies during pregnancy, including changes in their teeth and gums. As a result of increased levels of progesterone and estrogen, the bacteria found in plaque react differently, causing a condition known as “pregnancy gingivitis.” Symptoms include swelling, bleeding, redness, and tenderness in gum tissue. Pregnancy gingivitis may begin in the second or third month of pregnancy and increase in severity throughout the eighth month. Sometimes, the gums may react to irritants, such as food particles, by forming lumps. These lumps, known as “pregnancy tumors,” are not cancerous and are usually painless. The lumps usually diminish toward the end of pregnancy or after giving birth. However, if the tumor persists, it may need to be removed by a periodontist. In addition, studies have also suggested that pregnancy gingivitis can cause pre-term or low birth-weight babies. The bacteria that cause gingivitis can enter the bloodstream through your mouth and travel to the uterus, stimulating the production of prostaglandins, which may be responsible for inducing labor.

To assess your oral health, dental cleanings are recommended in the first trimester. Another cleaning may be suggested during the second trimester to monitor any changes and to assess your oral hygiene routine. Many dentists suggest postponing elective dental treatment during the first and third trimesters of pregnancy. The first trimester is a crucial time for the baby’s development because most of the organs are formed during this phase and the fetus could be susceptible to environmental influences. In addition, some women in the third trimester may be at risk for premature delivery and many find sitting in the dental chair for extended periods of time uncomfortable. Non-emergency procedures generally can be performed, but the fourth through sixth months are the optimal time for treatment. However, if you have a history of miscarriage, are at risk to miscarry, or have another medical condition, your dentist may recommend postponing treatment until after pregnancy.

If dental work is necessary during pregnancy, most forms of drugs are safe to take, including dental anesthetics such as Novocain or lidocaine. If antibiotics are necessary, research has also shown that penicillin, amoxicillin, and clindamycin are acceptable during pregnancy. Avoid narcotics for dental pain until after the baby is born. Tetracycline should also be avoided because it can cause discoloration of your baby’s temporary and permanent teeth. Also avoid aspirin. Over the counter products that contain acetaminophen, such as Tylenol, are approved during pregnancy. However, be cautious of drugs containing ibuprofen. Dental x-rays during pregnancy should only be taken in emergency situations. Consult your obstetrician if you require any anesthesia or if medication is prescribed.

For women experiencing morning sickness, it’s important to neutralize the acid caused by vomiting in order to prevent tooth decay. The Academy of General Dentistry recommends making a paste of baking soda and water, rubbing it on the teeth for thirty seconds, rinsing, then brushing and flossing. If you’re unable to do this, rinse with water instead.

Keep in mind that if your gums are healthy before pregnancy, they are more likely to stay healthy during pregnancy. If you are thinking about becoming pregnant, or are pregnant and experiencing any of the above symptoms, visit your dentist as soon as possible. Also, don’t forget to brush and floss daily and don’t skip dental cleanings. If you have gingivitis or periodontal disease, you may need to spend a little more time with your dentist during your pregnancy, but the results will be worth the time and effort. 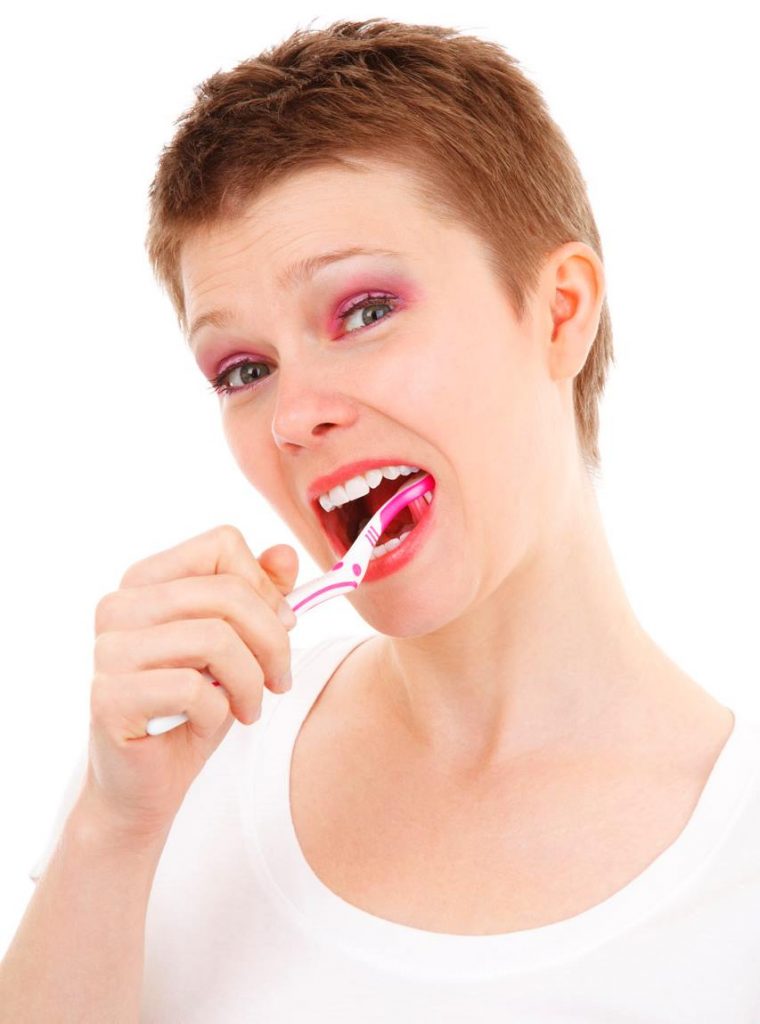 According to the American Dental Association (ADA), between 20 and 90 percent of menopausal and postmenopausal women experience pain, burning sensations, altered taste perceptions (salty, peppery, or sour), dry mouth, and sensitivity to hot and cold food or drinks. Some women may experience a condition known as menopausal gingivostomatisis, which is characterized by gums that are dry, shiny, bleed easily, and range in color from pale to deep red.

However, these symptoms could be lessened by hormone replacement therapy (HRT), according to a study from the Journal of Periodontology. The research suggests that postmenopausal women taking estrogen supplementation within five years of menopause may slow the progression of periodontal disease. According to the study, estrogen supplementation may reduce gingival inflammation and the rate of attachment loss (destruction of the fibers and bone that support the teeth) in women with symptoms of osteoporosis, which in turn may help protect the teeth. Be sure to check with your doctor to see if HRT is right for you.

According to research conducted in Great Britain and Sri Lanka, women taking oral contraceptives are more likely to experience gum disease than women not taking them. As this study suggests, birth control pills can affect a woman’s oral health, especially since many women take them for extended periods of time. Hormones found in oral contraceptives (which mimic the symptoms of pregnancy) increase the levels of progesterone in the body, causing the gums to react differently to the bacteria found in plaque. This can contribute to inflamed, bleeding, and swollen gums.

In addition, oral contraceptives can affect gum health after a tooth extraction. In a study published in General Dentistry, women taking birth control pills were twice as likely to develop a dry socket and localized inflammation after extraction. Why? A dry socket forms when the blood clot, which helps facilitate healing around the extraction site, is lost or does not form properly as a result of increased estrogen. The ADA recommends scheduling tooth extractions on days when you are taking the placebo pills in your birth control packet.

If you are taking birth control pills and are experiencing any jaw or periodontal problems, visit your dentist as soon as possible. A good oral hygiene routine that includes brushing and flossing daily can help stave off potential, or more severe, gum disease.

Bulimia nervosa and anorexia nervosa can cause serious damage to your oral health. The American Anorexia Bulimia Association, Inc. (AABA) describes bulimia nervosa as a disorder in which frequent episodes of binge eating (rapid consumption of food in one sitting) are almost always followed by purging (ridding the body of food). Bulimia nervosa is often discovered by the dentist through regular dental exams.

Purging, or vomiting, episodes cause acids from the stomach to come up through the mouth, resulting in enamel erosion on the back sides of the upper front teeth, sometimes within days of the first vomiting. The acids also contribute to sensitivity, thinning, and chipping of teeth. Dentists can also detect a possible eating disorder by sores that often appear at the corners of the mouth.

Preventive measures can be taken to help protect teeth. Patients with eating disorders are advised not to brush right away after vomiting because it can accelerate tooth enamel erosion. According to the Academy of General Dentistry (AGD), the most effective treatment is to rinse with a fluoride rinse, then use a counteracting paste, such as baking soda and water, and rub it on the teeth after vomiting to neutralize the acid. After 30 seconds, rinse off the paste, brush, floss, and use a mouthwash to freshen the mouth. If this is not possible, rinse the mouth with warm water after purging. If you have already suffered damage to your teeth as a result of bulimia, yourdentist can restore them with bonding materials once the purging episodes have stopped.

Anorexia can also cause damage to teeth. According to the AABA, anorexia is a disorder in which preoccupation with dieting and thinness leads to excessive weight loss. According to the AGD, anorexia can lead to bad breath, periodontal disease, and eventual tooth loss, in addition to vitamin, mineral, and calcium deficiencies, osteoporosis, and a rise in blood pressure. The AGD suggests eating crunchy foods to help scrape plaque off the teeth (crunchy foods act as a detergent), in addition to taking a multivitamin daily, including a calcium supplement.

Which glues can you use to repair broken teeth?

How to select the right mouthwash
How to Get Rid of Plaque Yourself?
Can Gum Disease Be Reversed?
Which glues can you use to repair broken teeth?
100+ Ideas for Dental Clinic Names
What to do about a fistula on the gums?
Cavities on the Sides of Your Teeth
What If You Have Holes in Your Gums?